Two TAU students developed an app that recreates the mythological zoo in the heart of the city.

For many years, there was a zoo right in the center of Tel Aviv. Residents of nearby streets used to wake up to roars of tigers and monkeys’ chatter. In 1980, the zoo and its residents were relocated to a large complex in neighboring Ramat Gan, but seasoned Tel Avivians still think of it fondly. Maya Shekel and Yuval Kela, two talented students in the digital media track at The Steve Tisch School of Film and Television, wanted to see it with their own eyes, and developed the TAZOO app that enables this.

Throughout the four years of their studies, they designed and created the unique widget, based on stories and memories of the local community. The animals were created by help of augmented reality technology, and in order to experience the project in full, all you need to do is to download the app on your phone, make your way to Tel Aviv’s City Garden and look for the orange signs that are scattered in the garden.

This new attraction, which will soon be launched in a festive ceremony, has already warmed the hearts of several Tel Aviv residents who inspired the creation of the project and the stories, as well as Tel Aviv Mayor, Mr. Ron Huldai, who still recalls the exact wording on the garden signs.

What brings two students, both born long after the zoo was closed, to recreate Tel Aviv’s animalistic past? “I’ve been living on Tel Aviv’s Hadassah Street all my life, right opposite where the zoo used to be,” says Maya Shekel. “Whenever people hear where I live, they ask me, ‘Did you know that there used to be a zoo there?’,” Therefore, after hearing the recurring questions for years, she decided to investigate the subject further together with Yuval Kela, who is also her life partner.

“After some online research, we discovered amazing photos of elephants and lions in the middle of Tel Aviv. We realized that the place used to be a cultural center for the residents of the city. We decided to start a Facebook group which we called ‘Tel Aviv Zoo Community’. Gradually, people would join the group and share photos, memories and stories about the zoo. This way, we got confirmation that there was a nostalgic need to revive the lost zoo, and to share its story with those who visit the place today, unaware of its history.”

“An elephant is about to join us,” Maya Shekel demonstrates to Tel Aviv Mayor Ron Huldai how the TAZOO app works

Unlike many apps that allow you to sit in your living room and feel like you’re somewhere else, Maya and Yuval chose to encourage their users to venture to the real site where the zoo was once located. “It was important for us to create an experience where people actually had to physically experience the sights and the feelings, while reviving the lost place,” explains Yuval.

Their main challenge was to adapt the app for two different target audiences: the older residents, who wish to reminisce, and to the younger target audience (such as the elderly residents’ children and grandchildren). “We overcame this hurdle by adding layers to the app, like short films about the zoo staff and additional information where you can choose to delve deeper and read more about each station. We also added some games that are more suitable for children,” he adds. 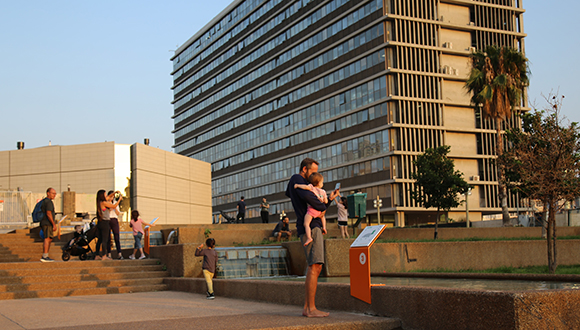 For big and for small. The virtual zoo in the Hadassah Garden

During their studies, Maya and Yuval learned the importance of storytelling on platforms of this type. They made sure to study the technology thoroughly to get a good grasp of both its advantages and limitations.

Throughout their work on the app, more and more ideas for future projects were born. “We’re constantly thinking of how we can take the idea and expand on it to include more destinations in the city, in Israel and in the world. There’s no shortage on ‘lost’ places that have left memories and history that can be revived by help of technology, allowing for people to experience and learn about them,” says Maya.

“The technology is constantly evolving. We hope to continue to create significant impact by combining storytelling and innovative technology. Our dream is to constantly create mainly projects that are accessible to the general public,” she concludes. On the question of which animal she would not want us to miss on the TAZOO app, she says “We would not want you to miss out on our hippos, Paula and Jacob! They jump into the water and really blend in with the physical space.”

Paula and Jacob with friends

The project was supported by the Tel Aviv-Yafo Municipality, which cooperated and placed the signs throughout the park, as well as The New Fund for Cinema and TV, which supported and assisted with funding.

*Maya and Yuval hope to create an English version of the app in the very near future, as part of the existing one.